Heroes is a new release by Utopyk & El Fulminador. The original version, an alternative Pop Rock song with a gentle beat and 80s reminiscences, has been taken from the album “2011“ released recently by the duo on Fulmen Records.

This EP also contains 4 previously unreleased versions, remixed by Rayo, The Imperishables and El Fulminador. All of them follow the original tempo of the track at 90 BPM, however taking it to alternative Electro-Acoustic reinterpretations (Rayo Remix), dark melodic Slo Mo (El Fulminador) and the powerful gritty sound created by The Imperishables.

Utopyk & El Fulminador are a duo from Spain and Argentina based in Berlin. Their music merges dark electronic beats with vocals in Spanish, German and English. 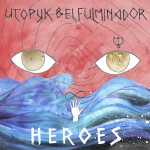